The BCCN warmly welcomes you to participate in its inaugural lecture series Contentious Politics in China – New Perspectives and Research Strategies in the Winter Term 2021/22. Zoom registration is required. Please find more detailed information, registration links and recordings below. 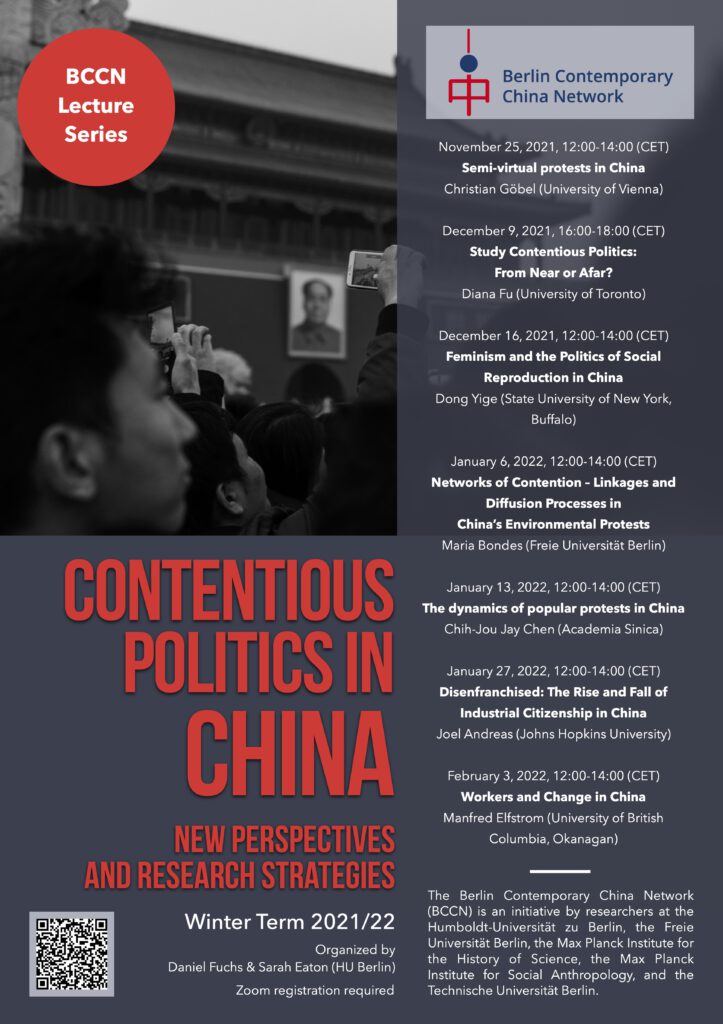 Study Contentious Politics: From Near or Afar?

Feminism and the Politics of Social Reproduction in China

The dynamics of popular protests in China

Disenfranchised: The Rise and Fall of Industrial Citizenship in China

Workers and Change in China

This talk is concerned with the role of social media in Chinese protest events. It introduces the concept of “semi-virtual protests”, protests that take place simultaneously in the physical world and on the Internet. In conventional street protests, the main protest activities consist of mobilisation and physical activities such as striking, rioting and demonstrating. In semi-virtual protests, these activities are merely the first stage of an event that continues to unfold online. Protesters use images and narratives produced during the street protest to create social media posts, which they ask other users to share widely. Their aim is to attract the attention of higher-level governments who, the protesters hope, will intervene on their behalf. With physical protests in China being subjected to severe restrictions, the online component of a protest event has arguably become more important than the physical action that underlies it. After introducing the concept of semi-virtual protests, the talk will first feature a visual analysis of recent protest events recorded on Chinese social media. Using all posts from more than 100.000 social media accounts that have posted about at least one protest event, the talk will then identify the main actors in semi-virtual protests.

Christian Göbel is professor of modern China studies at the University of Vienna and the principal investigator of the ERC-funded project “The microfoundations of authoritarian responsiveness: E-Participation, Social Unrest and Public Policy in China”.

Study Contentious Politics: From Near or Afar?

How should scholars study contentious politics in illiberal regimes, where risks are high for both the researcher and the subjects? This lecture will cover how ethnographic approaches can be used to study contention across various settings.  It contends that research questions starting with “the what and the how” are just as important as the “why.”  It will give students a theoretical and practical view of how to study contention across the different types of non-Western states.

Diana Fu is associate professor of political science at The University of Toronto, a fellow at the Brookings Institution, the Wilson Center, and the National-Committee on US-China Relations.  Her  research examines civil society, popular contention, state control, and authoritarian citizenship in China. She is author of the award-winning book Mobilizing Without the Masses: Control and Contention in China (Cambridge University Press, 2018).

Feminism and the Politics of Social Reproduction in China

From the five feminist activists being detained by authorities on the eve of International Women’s Day to numerous women speaking out about sexual assault against powerful men under the #MeToo banner, in the past few years, a series of high-profile events introduced a new generation of Chinese feminists to the global arena. How to make sense of this new wave of Chinese feminism? Conceptually, this talk maps out the overall landscape of Chinese women’s agitations and contextualizes it in the country’s long-standing class inequality and its deepening crisis of social reproduction. Methodologically, the talk reflects on the advantages and challenges of doing research that connects gender to political economy, two analytical approaches that are oftentimes insulated from each other.

Yige Dong is an assistant professor in sociology and global gender & sexuality studies at the State University of New York, Buffalo. She holds a Ph.D. in sociology from the Johns Hopkins University. Her research interests include political economy, labor, gender, contentious politics, and comparative-historical methods. Dong’s research on Chinese labor politics and feminist movements has appeared in International Journal of Comparative Sociology, Critical Asian Studies, Modern China, among others. She is currently working on a book manuscript that examines the politics of care work during the rise and fall of industrial socialism in China.

With the growing urgency of China’s environmental crisis, a plethora of non-state actors has entered China’s green sphere that now comprises environmental organizations, experts, lawyers, green journalists, and local communities fighting for a healthy living environment. In Western societies, it is the linkages and diffusion processes between these groups that drive social movements. In China, environmental contention has largely been regarded as localized and parochial with local communities isolated from each other and external assistance.

Drawing on field research and a comparative case study approach, this lecture investigates resistance against waste incinerators, a main cause of environmental conflict in China. The lecture shows that a network of contention has emerged that links up local communities across the country with supra-local actors in the issue field. These linkages and diffusion processes have fostered a national protest wave, enhance the success of individual campaigns and have strengthened a globally-embedded advocacy network for more sustainable waste policies. Nonetheless, the prospects for a full-grown social movement remain limited within the restrictive political framework. The lecture also tackles the difficulties of using an ethnographic approach to studying contention in China.

Maria Bondes is a Guest Lecturer at the Institute of Chinese Studies at the Freie Universität Berlin. Her research centers on state-society relations, contentious politics and environmental governance in China with a focus on environmental contention.

The dynamics of popular protests in China

This lecture will show the trends and characteristics of popular protests in China, drawing evidence from a database the author built by collecting more than 12,000 news stories on China’s mass protests from 2000 to 2019. The data present the ups and downs of China’s social protests over the past two decades, showing that social protest in China has been diffused widely throughout different social groups and has covered a vast variety of issues across a wide geographical area. However, despite the trend of subsiding protests after the mid-2010s, the Chinese state has a lower capacity to channel popular protests into institutionalized forms as in democratic polities. Under Xi Jinping’s rule in 2013-21, the regime has been relying on increasing surveillance and repression to squash protest activities. This study concludes that the dynamics of social protests in China are contingent on its state-society relations in Xi Jinping’s totalitarian regime.

Disenfranchised: The Rise and Fall of Industrial Citizenship in China

In the decades following World War II, factories in many countries not only provided secure employment and a range of economic entitlements, but also recognized workers as legitimate stakeholders, enabling them to claim rights to participate in decision making and hold factory leaders accountable. In recent decades, as employment has become more precarious, these attributes of industrial citizenship have been eroded and workers have increasingly been reduced to hired hands. No country has experienced these changes as dramatically as China. Drawing on a decade of field research, including interviews with both factory workers and managers, Andreas traces the changing political status of workers inside Chinese factories from 1949 to the present, carefully analyzing how much power they have actually had to shape their working conditions.

Workers and Change in China

Strikes, protests, and riots by Chinese workers have been rising over the past decade-plus. The state has addressed a number of grievances, yet has also come down increasingly hard on civil society groups pushing for reform. Why are these two seemingly clashing developments occurring simultaneously? Drawing on his recent book, Manfred Elfstrom will use extensive fieldwork and statistical analysis to examine both the causes and consequences of protest in “the workshop of the world.” Instead of taking sides in the old debate over whether non-democracies like China’s are on the verge of collapse or have instead found ways of maintaining their power indefinitely, he will explore the daily evolution of autocratic rule.

Manfred Elfstrom is an Assistant Professor in the Department of Economics, Philosophy, and Political Science at the University of British Columbia, Okanagan. He is the author of Workers and Change in China: Resistance, Repression, Responsiveness (Cambridge University Press, 2021).